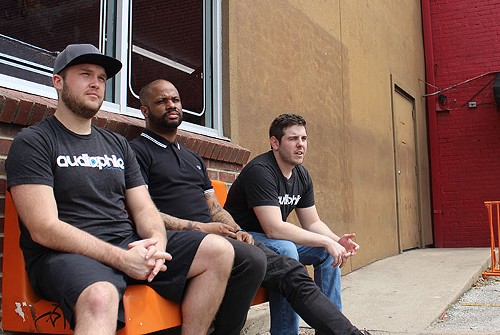 Audiophile Music Group acts as the intermediary between the west and east coast house scenes, outlaws in all ways short of aesthetic, their vibe has been shaking Texas for almost a decade. As if starting a house group in the southwest wasn’t hard enough, co-founders Jimmy Freer and Jacob Buck branched out further than standard label management, forging four more entities under the Audiophile umbrella and establishing the unofficially-“official” house scene of Dallas Fort Worth.

Peering into their wares is a vast and dangerously captivating foray into electronic music, deep house being the weapon of choice. Releases from Franky Wah, Sisto, and Touchtalk comprise the 2018 techno frontline, but genres further bloom outward into 6058’s “Shelter Point” and Nervous Freaks “We Don’t Care” – repping the Eukaryota sub-label. When you notice the android head logo on a track’s art, you’ll know you’re in good hands.

The collective’s notable proliferation of quality electronic music doesn’t go unnoticed. Freer took some time to answer a few questions on starting a label from the ground up, maintaining a presence in the southwest, and riding the ups and downs of managing a dynamic label group.

Label Engine: Shed some light on the Audiophile collective, such as how it began as well as your role in it. I imagine starting up an electronic label in Texas couldn’t have been too easy: When did Audiophile kick off, and what’s your day-to-day in managing it?

Jimmy Freer: The company actually got started in early 2012 with my friend Lane Mizrahi. It was initially created to be an event company, but shortly after we started it, we quickly realized it wasn’t going to work. Lane was getting busy at his day job and honestly the first event put a really bad taste in his mouth. However, all the branding was done and active so he kind of passed the reigns to me to do what I pleased with it. From there I took it in the direction of a record label and shortly after that met Jacob Buck at one of my shows and we instantly hit it off with our love of the music. If I recall correctly, he asked if there was anything he could do to help, which at the time I was very keen on getting an extra hand. We’ve really been through it all together, and seven years ago Jacob became the co-owner of Audiophile Music Group. Blessed to have the dude as a partner, and it only gets easier by the day.

In 2014 Jacob and I had been going to this amazing club in Dallas called It’ll Do and became quite fond of the resident DJ named ‘Redeye’. I really don’t think I’ve had such a schooling on proper house & techno than on that dance floor. I still look back at it as being some of the best years of my life. After weeks of going to the club we became great friends and he was asking me for some advice on starting a label – and the light just instantly clicked. We launched the underground house & techno side of the label (Audiophile Deep) and that was the beginning of that.

Since then we launched Audiophile XXL, as the interest in the bass side of house music was peaking. Robert Pennington who has done a lot for the Dallas community came to mind as someone who should spearhead that label and so he joined us around 2015. He’s been an integral part of all of our success and I’ve always looked up to him as being one of the most honest and hardworking people I know.

As far as starting a label in Texas, it’s extremely hard. I don’t know what it is about this area but it’s really hard to get local love like in LA, NY, etc. There’s a pretty brutal local mentality here that I think Dallas has a long way to go with. I’d say out of all of the issues that have set us back, location has been our #1 issue with growth. It really pains me to say that after 24 years of living in the DFW metroplex, but it is what it is.

Our day to day really is not consistent at all. Some days we are doing loads of art, some days distribution, promo, accounting, etc. There’s really no set workflow. You never know what’s going to come up in the pipeline.

LE: On the website there are a few “sub”-labels under Audiophile, such as Eukaryota and Bodhi Collective. How do they function under the umbrella, and is there separate management between Audiophile and the other labels?

JF: Indeed, as of right now we have Audiophile Deep, Audiophile Records, Audiophile XXL, Bodhi Collective and Eukaryota. They all have their own place genre wise and we have had to make adjustments throughout our time to find a pocket for each one. As far as separate management we have different label managers for our labels, mostly because it’s a bit hard to keep up with changes in the space otherwise. We do reach over and help each other often which has taken a long time to figure out how to best accommodate each other while giving us our own pride in running our selected labels. Without a sense of pride in your own project it’s pretty hard to get excited about it. We all feel this way and so our chain has revolved around it.

LE: The obligatory, what’s the best/worst parts of managing a label? Are music enthusiasts buying more records and/or going to more shows these days? I’m sure it’s more business oriented than playing live DJ sets ubiquitously. Would you recommend starting up a label to any of those passionate out there? Any tips?

JF: Best parts: Meeting some amazing people around the globe. Seriously some of my best friendships have come from managing a label, and getting to know people on other sides of the world. Also, being able to really put our all into releases and see an artist succeed. There’s really nothing even close to that feeling.

Worst parts: Failing. It happens. Especially these days where most of your success relies on a curator’s taste. Many times it can actually become extremely discouraging, and will actually lose you the opportunity to work with an artist again.

To be completely honest people are buying music at a very rapidly declining rate. Streaming is becoming the factor here and so our strategy has shifting big time into the space and leaving the digital downloads behind. Would I recommend starting a label right now? Probably not. We feel like we really hit the money on when we got up and running. It’s extremely hard for people to launch a brand in this age where all the focus is on tracks in a playlist, and many times not on the artist or label at all. We feel like this will get even worse as platforms try and go directly to the artist for distribution. However, I feel like people will quickly realize that there is a space for a label and distribution, as there are a lot of things artists don’t have the time or connections for.

LE: Skimming through a few playlists I’ve noticed a real standard of quality for Audiophile releases. What’s the main avenue in recruiting artists? Do you find more artists through submitted demos, or word of mouth/live shows/other means?

JF: Actually, word of mouth has been our main method of recruiting. We’ve reached out a handful of times and found moderate success but it’s really the referrals that have landed us our biggest releases. We’ve become quite known as a label that launches the careers of up and coming artists, but it can be sometimes devastating and bittersweet watching them graduate to the big leagues after the amount of time and effort put in. We are kind of debating which route we want to go down for 2019, but for now we will stick with what we’ve always done.

LE: Any upcoming big events coming up for Audiophile? Notable releases, or anything to keep an eye out for. Lastly, how useful is Label Engine to a music collective like yourselves? Is there anything particular that LE does right from your end?

JF: As of right now we have an Audiophile XXL release party on November 30th with the heavy hitting Botnek at our home club of It’ll Do here in Dallas. As far as notable releases, it’s really hard to pinpoint anything. I think the whole staff would agree that the end of Q4 and 2019 is going to be our best time period yet for releases label wide. Label Engine has definitely been paramount in our success, simply for the customer service. We’ve been with distribution partners before who would take months to answer our tickets. With Label Engine it gets sorted immediately. That’s my biggest compliment for them by far, it’s EXTREMELY important from the label side to have dexterity on that end.

Check out Audiophile’s Spotify playlists here, and keep up to date with the collective’s activities on their website.